Diana Hulboy, BS’89, has lived science from the outside in … and back. The Utah native graduated from the University of Utah in biology with a minor in chemistry before tackling graduate school, a post-doctoral fellowship and a career in the biotech industry, most recently as Director of Technical Business Development at MED Chem 101, a research reagents manufacturer.

But it was when she came down with cancer herself that the arc of her life seemed to come full circle. It has been a journey not unlike the bicycle races and rides she participates in—the inner/outer cyclical game that’s not actually a game, but life itself.

Fresh out of Alta High School in Sandy, Hulboy was offered not one but two scholarships from the UofU. As an undergraduate, she recalls a large group of friends hiking with her to the top Mt. Olympus, then running down and not being able to walk the following day. During her freshman year in the dorms she hung out with new friends (rather than studying) and remembers the Challenger space shuttle exploding as they all gathered in the commons area in shock.

Hulboy studied under Professor Joe Dickinson, dissecting transgenic Drosophila melanogaster larvae and adults to examine aldehyde oxidase activity. Later she was employed as a technician in the lab of Ryk Ward where she participated in DNA extraction and RFLP analysis of blood from patients with familial hypercholesterolemia and rheumatoid arthritis.

Armed with her degree in biology and a minor in chemistry, Hulboy headed off to graduate school at the University of Texas Health Science Center, MD Anderson Cancer Center in Houston where she continued her studies in molecular biology between 1989 and 1995 in the lab of Guillermina Lozano.

How SBS alumni make the transition from academia to industry is often a study in serendipity. Such was the class with Hulboy. Her research as a post doc at Vanderbilt University in Tennessee was elevated further in her studies of matrix metalloproteinase (MMP) expression and activity in normal and tumor model systems, and it was in her last year there, she says, that she attended the annual conference of the American Association for Cancer Research (AACR).

“In the exhibit hall I chatted with the co-owner of a small company, BIOMOL Research Labs, that manufactured assay kits and reagents for researchers,” she recalls. “They were looking for a protease expert to round out their product line, so my postdoctoral work with MMPs was a good fit.”

In 2000 Hulboy joined BIOMOL, located outside of Philadelphia. Rob Zipkin, Ph.D., a medicinal chemist and the company’s founder, became her mentor for working in biotech. “It was my dream job for a decade,” she admits. During that time, BIOMOL expanded to a multimillion-dollar company that was sold to Enzo Life Sciences.

Eventually Hulboy would rejoin Zipkin at his new company Med Chem 101, LLC. Similar to BIOMOL’s ethos, she explains, “we follow the scientific literature to identify key reagents that would be useful for researchers.” In the case of Med Chem 101, the reagents are bioactive small molecule chemicals, peptides, and lipids that act as inhibitors, agonists, etc. “Many of them are drugs, but we sell them for research use only.”

It turns out that researchers use these compounds as tools to tease apart the signaling pathway they are studying. “What happens when they block one step of the pathway with an inhibitor?” Hulboy asks rhetorically. “Or what happens when they activate another step? This tells them about the components of each pathway, and how they are all related to each other. If only I’d known about these types of reagents during my academic research days! They would have made my projects much better.”

This work constituted a time in her life when the biology of the body was theoretical and lab-based, filled with hours and hours at the bench and then writing up results in academic journals eventually resulting in her PhD. But while science had always been a key part of her life and personality, it remained, appropriately, academic … until it wasn’t.

And so it goes with the applications of basic science in the “real world” and in health sciences in particular.

And so it goes, sometimes, when the researcher becomes the subject matter of that research. After being diagnosed with stage II/III breast cancer in June 2017, Hulboy underwent six months of chemotherapy, multiple surgeries including mastectomy, and two months of radiation therapy. She started writing a blog about her experiences:

My PhD and postdoctoral work (11 years) was all about cancer, and one of

my projects was on breast cancer (in mice). Although I know the subject of

cancer well, it's from a cellular and molecular perspective, not clinical, so

I've much to learn. It's both good and bad to have some knowledge: good

because the more I understand what's going on, but better I feel, even if

it's bad news; bad because I can go down rabbit holes of thought that I 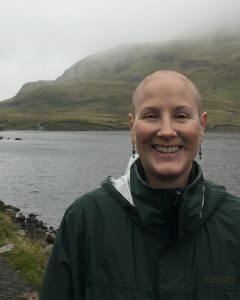 September 2017 at the top of Stickle Ghyll in England's Lake District in the midst of chemo and after a grueling but exhilarating hike.

As with science, cycling has shaped who Hulboy is. And now dealing with COVID-19, cycling and other exercise have proven even more important. To avoid crowds, she has been riding and walking in a nearby historical cemetery that doubles as an arboretum, “and this in turn has inspired me to take up nature photography. Staying in touch with my friends through the sport app Strava has been wonderful.”

“My life partner, Liz Feeney, was amazing,” says Hulboy, returning to the subject of her recovery from cancer, “and being healthy (thanks to cycling), an optimist, and a scientist got me through it. It was terrifying, but the more I understood what was going on, the better I felt, so I learned about everything that was going on, and being in clinical trials and research studies throughout my treatment also helped."

It’s been almost three years since Hulboy’s intense part of cancer treatment was completed. Since then she has been on tamoxifen, which interferes with the binding of estrogen to its receptors, the latter of which are abundant on her cancer cells. “I am healing all the time, though I do have some permanent side effects that limit my ability to exercise intensely, at least for now. I am determined to overcome them, and in the meantime, I can at least still ride my bike!”

Rigorous training, begun at the School of Biological Sciences, and personal adversity through her bout with cancer have given Diana Hulboy perspective as well as strength and optimism. And she is quick to share that optimism and perspective with current students at the U who may be struggling through this unprecedented time of pandemic: “Don't give up on going to the U--it is so much more than 'just' an education.”