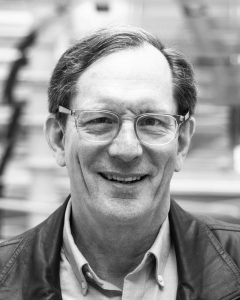 Bill Jack’s undergraduate experience at the University of Utah’s Chemistry Department was foundational and flavored his graduate school and professional path. In hindsight, Bill also recognizes the influence of the few humanities courses he participated in where discussions on James Joyce and American Literature altered his perspective on the world. His only regret about his undergraduate years here at the U, is that he did not slow down and take advantage of broader educational opportunities to learn as much as he could in both the humanities as well as in chemistry.

During one undergraduate summer, Bill was inspired by a single sentence in a physics course that would influence the way he approached the world. The instructor, Dr. Swaggart, began his class by telling the students, “I’m going to teach you about a new way to look at the world.” Bill integrated this sentiment in a variety of different subjects since then, whether in math, social studies, literature, chemistry, anything really. “It’s a different way to see the world, and that broad background just increases your appreciation of the world,” says Bill.

Bill’s educational foundation lead him to a graduate program at Duke University where he thought he would begin a career as a physical biochemist after “tailing” Sidney Velick all summer, but, in an effort to simplify his newlywed life, he asked to work in a lab which quickly altered his path. He ended up being a graduate student with Paul Modrich researching an enzyme that ended up being one of the enzymes that is foundational at New England Biolabs--the only “real” job he’s ever had after he completed his graduate and postdoc work.

Bill has been working at NEB for the past 31 years, and now enjoys the freedom to take risks in his research. He confirms that the company’s founder is absolutely right when he claims that, “New England Biolabs scientists can’t wait to get to work each morning to see how their experiments turned out.” Bill’s latest project is admittedly risky, but that’s what makes it so exciting. The possibility that something might work as he tries to wrap his mind around different ways of analyzing and changing the environment to find a solution for such a fascinating biological phenomena keeps him pushing new boundaries.

Bill is collaborating with a team at Columbia University with an expertise in the biology of the DNA sequence he’s investigating. They’re growing, breaking, and piecing back together the sequences to try to replicate in a test tube the DNA splicing that happens naturally. “I believe that there will be steps along the way that we will have insights into other organisms, other processes whether they be normal ones or ones that cause disease, and there’s also even prospects from a commercial perspective that some of the enzymes involved will be useful in advancing other molecular biology techniques. The company I work for takes enzymes that occur in nature, pulls them out, and characterizes them so they’re available in other workflows to prepare DNA sequences.”