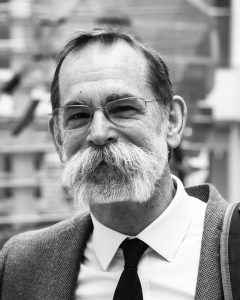 As Yale’s current Chair of the Chemistry Department, it seems clear that Kurt has always understood what the foundation of a successful chemistry department is built on: human connection, collaborative research, and investment in students. As a graduate student at the University of Utah, Kurt took advantage of Professor Ted Eyring’s time, knowledge, and generosity as much as Ted would endure his endless questions and curiosity. He’s spent the past 16 years as the Director of Undergraduate Studies at Yale University, and has committed to create an environment for students that allows them to indulge their curiosity--just as he was able to do with Professor Eyring.

After being at Yale for 38 years, Kurt has recently been part of a renaissance in their college of science as they renovate and build facilities that give all students the opportunities and experiences they need in order to establish themselves as serious chemists and innovators. The department’s investments have made it possible for every undergraduate in organic chemistry to have their own hood with an updated condenser system that delivers chilled water back through a seperate gravity-fed drain system--saving 150,000 gallons of water per year. Kurt has moved his lab three times in the past few years with all the renovating, but of course, is already seeing the extensive benefits to student research.

Since 1995, Yale has made a big push to provide more opportunities for women, minority, economically underprivileged, and other historically underrepresented students in STEM through their STARS Program. Zilm has seen the impact of this program on the science community, and the stats reveal that students who participate in this program continue on in the sciences with a significant impact.

Kurt’s own research is on the cusp of exciting results that he will be publishing in the near future. For one project, he’s been collaborating with a team at Dartmouth trying to figure out what it is that makes infectious prions infectious and how to differentiate them from non-infectious prions. He’s also been working with a team at Yale’s Medical School to understand the molecular mechanism of Alzheimer’s Disease--which he thinks they now understand, and have drugs that seem to work with mice.

These research projects have been 90% of Kurt’s work over the past five years, and it’s all finally starting to bear some fruit. He is quick to talk about the importance of collaboration:

“These projects are really starting to bear fruit only because we’re collaborating with these two teams, and we have the right people and the right facilities to work on this. None of us could have done it on our own.”

For Zilm, it’s all connected: from the similar molecular origins of his two projects, to the investment in students and facilities, to his beginnings at the University of Utah, and the collaborations he’s been part of in the past, present, and future.