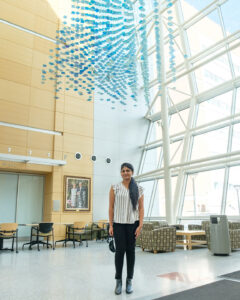 In the entrance of the Eccles Health Sciences Education building.

For Sarmishta Diraviam Kannan, HBS’17, the journey to her “dream school” – the University’s School of Medicine – spanned about 25 years and some 8,780 miles.

Sarmishta was born in Tamil Nadu, India, which is located on the southern tip of the Indian sub-continent. In addition to the long history of the Tamil people, Tamil Nadu is famous for its temples, festivals, and celebration of the arts.

When Sarmishta was just nine years old, her family immigrated to the United States. They settled in Boston where her father worked for GE Healthcare. In 2008, the family moved to Salt Lake City, near the corporate headquarters of GE Healthcare, while her father continued his career with the company.

Sarmishta, who was then 12 years old and in junior high school, was still mastering English as a second language and adjusting to social norms and public education systems in America.

It was a difficult time for Sarmishta, but her “dream” was beginning to form.

Sarmishta graduated from Hillcrest High School, in Midvale, in 2013 with the International Baccalaureate (IB) diploma.

“The IB diploma is a rigorous program, and I was the only one to take the higher-level courses in all three sciences of physics, chemistry and biology,” says Sarmishta. “It was through the IB program that I found my passion in the sciences, especially biological sciences, and completing the IB program prepared me well for college.”

Sarmishta decided to attend the U as an undergraduate because of the abundance of research opportunities and the Honors degree option in Biology which gave her the chance to perform long-term research that culminated with an Undergraduate Thesis. Plus, it put her in close proximity to the School of Medicine. 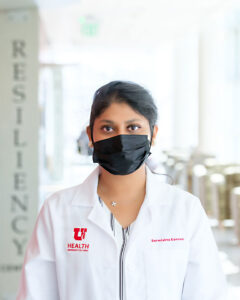 The “dream” was clear now and within reach.

“The Honors thesis requires involvement in research that finishes with writing a paper on a particular research project. That experience was valuable to me as I got the opportunity to be involved in a research project from start to finish,” says Sarmishta.

She worked with Dr. Kevin Jones at the Huntsman Cancer Institute to help discover the roles that lysosomes and autophagy play in alveolar soft parts sarcoma, clear cell sarcoma, and synovial sarcoma.

“In the Jones lab, it was fascinating for me to see how researchers used experimental data to understand cancer biology. So, I decided to pursue sarcoma research for my thesis,” says Sarmishta.

“I investigated the hypothesis that Alveolar Soft Parts Sarcoma (ASPS) and Clear Cell Sarcoma (CCS) morphology is attributed to lysosomes and that these cancers up-regulate autophagy genes using autophagy as a survival mechanism,” says Sarmishta.

“I learned to design investigations and troubleshoot various lab protocols to gather data and test the hypothesis. Critically analyzing the data supported the hypothesis that ASPS and CCS contain abundant autophagic lysosomes. However, it raised further questions indicating more research was necessary to better understand autophagy’s role in ASPS and CCS.”

“Writing my thesis taught me to build an evidence-based argument based on my data, critically analyze the work of others, synthesize new ideas for further research, and effectively communicate complex topics,” says Sarmishta.

After graduating with an Honors degree in Biology, she continued to work in the Jones lab as a full-time Lab Technician before starting medical school. She worked on various projects including writing a review manuscript on sarcomagenesis, titled Genetic Drivers and Cells of Origin in Sarcomagenesis, which was published in early 2021 in the Journal of Pathology.

She also worked on a project that focused on modeling synovial sarcoma metastasis in mouse models. Sarmishta was listed as a co-author on that paper and was published in the Journal of Experimental Medicine.

Finally, her “dream” was realized.

Today, Sarmishta is about halfway through her second year of the MD program at the University’s School of Medicine.

“It has been a very fulfilling experience so far! I am grateful to have the opportunity to follow my passion, learn about the human body, help and support people going through healthcare challenges. I am excited to start my clinical years where I get to rotate through various specialties in the hospital and apply all the knowledge I have been learning to patient care,” says Sarmishta.

In addition to school, she enjoys reading, painting, watching movies and singing.

In fact, Sarmishta is a classically-trained Carnatic singer. Carnatic music is a traditional system of music from India that provides a nearly limitless array of melodic patterns. It emphasizes vocal performance.

“I started singing when I was five and my parents enrolled me in Carnatic music classes in India. I continued my training after moving to the United States,” says Sarmishta.

“I perform publicly at the local Hindu Temple and at Indian festivals. One of my most cherished experiences was performing a Hindu song at the 6th Parliament of World Religions event, that was held in Salt Lake City.”

Sarmishta is scheduled to complete the MD program in 2024.

“A new dream is already forming,” she says. 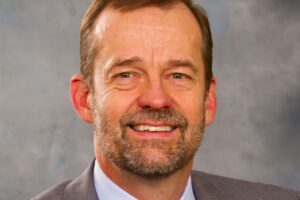 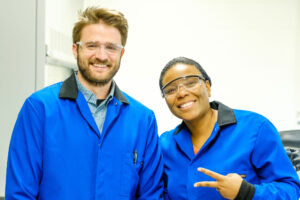