Astronomers and astrophysicists at the University of Utah have been driving discoveries in the field for years. The innovative research from the Department of Physics & Astronomy is making an impact in all areas that the national community has determined as priorities in a once-in-a-decade report that guides the direction of astro-research for years to come.

This Decadal Survey was commissioned by the National Academies of Sciences, Engineering and Medicine to identify goals and challenges for the exploration of the cosmos. Unraveling the secrets of the universe requires vision and extensive planning—astronomers and astrophysicists use massive ground observatories and sophisticated space telescopes for projects that need years of preparation. The guidance of the decadal survey is crucial to this effort.

Released in early November, the decadal survey highlights three key research areas ripe for discovery: “Worlds and Suns in Context” focuses on stars and planets; “Cosmic Ecosystems” describe galaxies and the cosmic web they form; and “New Messengers and New Physics” provides a new view of the universe through high-energy particles, gravitational waves, and deep sky surveys. Scientists in the U’s Department of Physics & Astronomy are leaders in each of these areas. 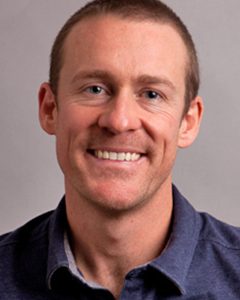 “Over the past several decades, department faculty pushed forward on an increasing number of research areas in astronomy, astrophysics and particle physics. Now these separate initiatives are coming together, in focus, and beautifully aligned with the decadal survey’s top priorities.”

Over the past several decades, department faculty pushed forward on an increasing number of research areas in astronomy, astrophysics and particle physics, notes Professor Dawson. “Now these separate initiatives are coming together, in focus, and beautifully aligned with the decadal survey’s top priorities.”

Worlds and Suns in Context

The sun hosts a rich system of planets, from the massive gas giant Jupiter and the icy dwarf planet Pluto, to Earth, the only body in the universe known to sustain life. Recent observations from space and the ground have revealed thousands of other worlds around distant stars. Some are so large as to dwarf Jupiter, others appear to be exotic water worlds. A precious few may even harbor life. A key priority of the decadal survey is to understand the nature and origin of these worlds and the stars that host them. Driving this quest is a profound question, whether we are alone in the cosmos. 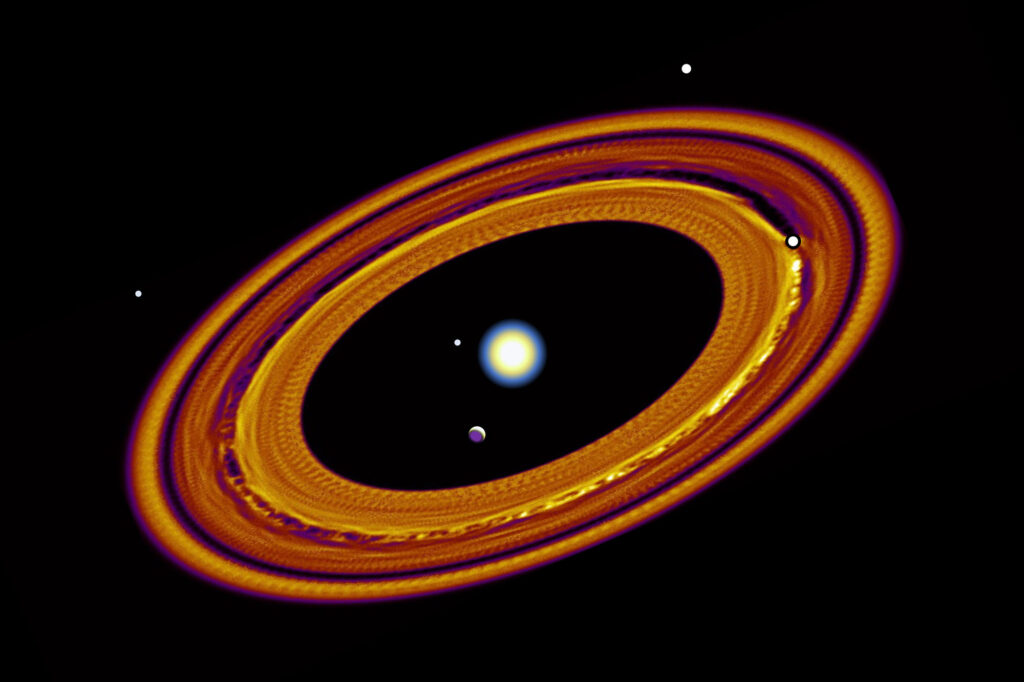 The Sloan Digital Sky Survey, (SDSS), an international effort to chart the cosmos, is mapping stars across our galaxy, the Milky Way. Scientists at the U are in leadership roles in this large-scale, on-going collaboration. With detailed measurements of millions of stars, SDSS will provide an understanding of their chemical composition, how the elements are spread throughout the galaxy, and the connection between stars, their composition and the planets they host. This world-class project is integral to the decadal survey’s scientific goals.

Research at the U also focuses on planet formation, how worlds emerge from the gas and cosmic dust that encircle all observed young stars. Simulations run on high-performance computers track this process, how planetary building blocks come together, sometimes through violent collisions, to grow into the planets like those in our solar system and around other stars in the cosmos.

Looking beyond the stars visible in the night sky, astronomers have discovered a wealth of exotic objects, including neutron stars, with the mass of the sun packed into a region the size of a small city, and black holes, where matter is so concentrated that space and time warp to form an event horizon, from which nothing, not even light, can escape. Telescopes also reveal galaxies, like our own Milky Way, with hundreds of billions of stars, even supermassive black holes in their centers, strewn across space. Neighboring galaxies, drawn together by gravity, form enormous clusters, the most massive objects in the universe. They are permeated by dark matter, an unidentified, ethereal substance known only through its gravitational influence. Together with galaxies and galaxy clusters, the dark matter sea forms patterns – knots, sheets and walls in a vast cosmic web. A second top priority of the decadal survey is to understand this cosmic web, the structures it contains, and how these structures formed out of the hot, dense early universe. 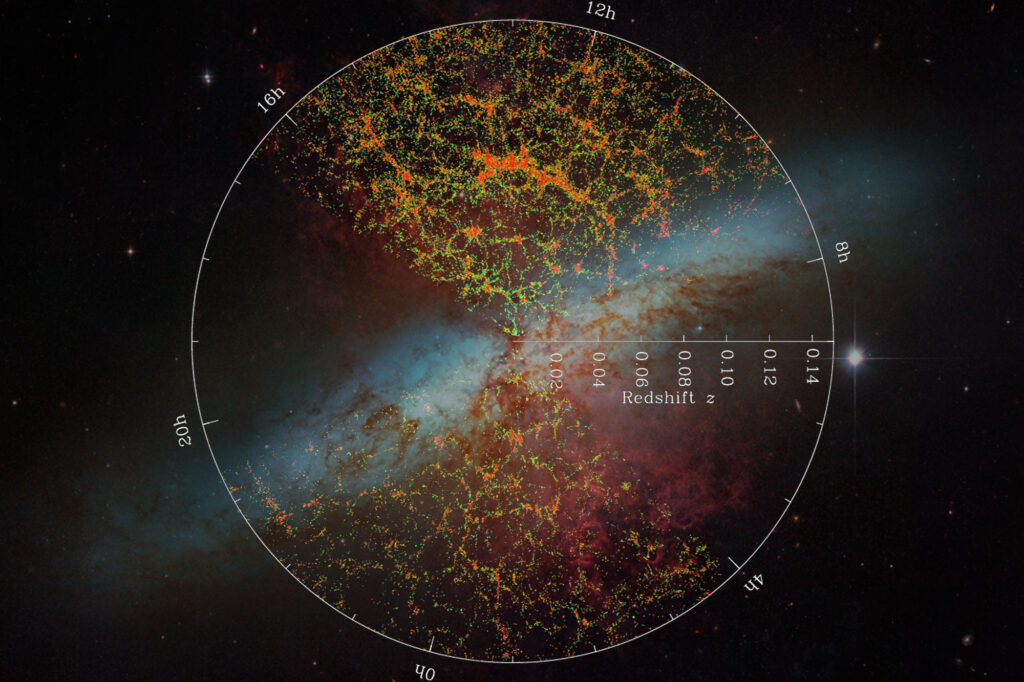 At the U, researchers are studying the ecosystems that produced this diversity of cosmic structure. With theoretical and computer studies, as well as observations from the ground and space, Utah faculty are probing the nature of galaxies, the central supermassive black holes they harbor, and how stars, gas, and dark matter interact to produce the cosmic structures we observe today. Research on nearby small galaxies, including satellites of our Milky Way and other nearby massive galaxies, will help us understand their formation histories and the role of dark matter in that formation. Upcoming observations with NASA’s James Webb Space Telescope, the most sophisticated observatory ever launched, will help university researchers discover supermassive black holes in the central regions of galaxies to learn how these exotic beasts formed. At larger distances and earlier times, large clouds of gas – the precursors of galaxies– provide key diagnostics for researchers at Utah to identify the underlying physics of galaxy formation. Galaxy clusters, with up to thousands of galaxies bound together, are also in focus at Utah as researchers take advantage of NASA’s NuSTAR mission to study the hot X-ray emitting gas trapped in these massive objects. These separate research threads are weaving together a more complete and compelling picture of cosmic structure formation.

Studies of the universe began with optical telescopes, using our eyes to capture the signal from distant sources. As technology advanced, we used cameras to record this light, thus allowing for longer integrations and deeper insights into the cosmos. We soon began to explore the cosmos with light not visible to our eyes, from radio waves to X-rays to light with even higher energies. The scientific community has continued to add new messengers from the cosmos beyond the electromagnetic spectrum: High energy particles, neutrinos, and gravitational waves. Combining these multiple messengers is key to understanding the underlying physics of the most extreme events in the cosmos such as stellar explosions, collisions between black holes or neutron stars, and the dramatic forces in the regions surrounding supermassive black holes. Our understanding of the universe has advanced with each new way of observing the sky. 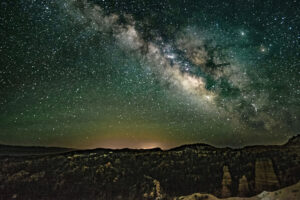 The faculty at Utah helped introduce some of these new messengers to the field of astrophysics. The Telescope Array, near Delta, Utah, is the most recent in a series of Utah experiments to study very high energy particles. The highest energy particle on record was detected from this sequence of experiments in Utah. The Utah faculty round out the full suite of messengers with significant contributions to the LIGO interferometer that is used to detect gravitational waves, the IceCube Neutrino Observatory at the South Pole, and the Veritas and HAWC (High-Altitude Water Cherenkov) observatories, and the future CTA and SWGO observatories used to detect the highest energy photons. The Utah faculty also leverages national facilities to use everything between radio and X-rays to explore the physics behind the most dramatic events in the universe.

This theme within the decadal survey also includes new physics, particularly the unknown physical natures of dark matter and dark energy. The possibility for discovering new fields, new particles, new laws for gravity, or new particle interactions motivated the construction of the Vera C. Rubin Observatory in Chile and the Dark Energy Spectroscopic Instrument in Arizona. Faculty in Utah use the data from these observatories to constrain models of fundamental physics and hunt for the signatures of new physics. Faculty in Utah are also making theoretical predictions for new signatures that dark matter or other new physics may introduce into the full suite of astronomical detectors that are used to track the multiple messengers from the cosmos.

John Belz - Studies the composition of the highest-energy cosmic rays, and investigated the use of novel instruments for their detection. He also uses computational techniques to model extreme spacetimes at the threshold of black hole formation, work complementary to the studies carried out by the Utah gravitational wave physics group.

Douglas Bergman - Uses observations of ultra high energy cosmic rays to test fundamental physics at the highest energies and to explore where extreme acceleration mechanisms exist in the local universe.

Benjamin Bromley - Explores the formation of planets using supercomputer simulations. This work identifies the conditions necessary for a star to host a planet like Earth.

Joel Brownstein - The head of data for the Sloan Digital Sky Survey (SDSS). He uses the distribution of luminous matter and dark matter to explore cosmic ecosystems.

Kyle Dawson - Co-spokesperson who sets priorities for cosmological studies within the 500-member, Dark Energy Spectroscopic Instrument (DESI) collaboration. He uses these spectroscopic data to search for new physics such as dark energy, new theories of gravity, and new fields that affect the evolution of the cosmos.

Paolo Gondolo - Studies theoretical models for new physics related to the nature of dark matter, and uses multi-messenger observational and experimental data to test them.

Yao-Yuan Mao - Searches for galaxies in the nearby universe that are much smaller than the Milky Way and studies their roles in the cosmic ecosystems and their connection to dark matter.

Carsten Rott - Studies neutrinos as a member of the IceCube collaboration, an observatory built into the pristine ice of the South Pole.

Pearl Sandick - Studies possible explanations for the dark matter in the Universe, how to confirm its nature experimentally, and how it affects our understanding of particle physics.

Daniel Wik - Takes a broad view of cosmic ecosystems by exploring clusters of galaxies and their wells of hot gas.

Gail Zasowski - Uses positions, motions, ages, and chemical makeup of millions of stars in the Milky Way and nearby galaxies to better understand today’s worlds and suns. 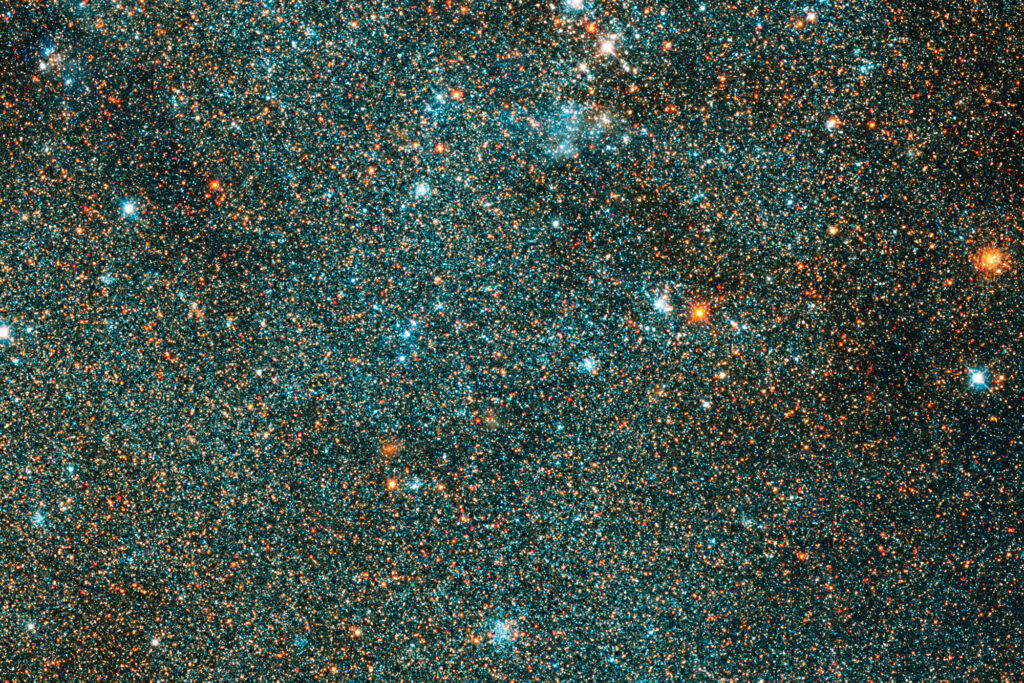 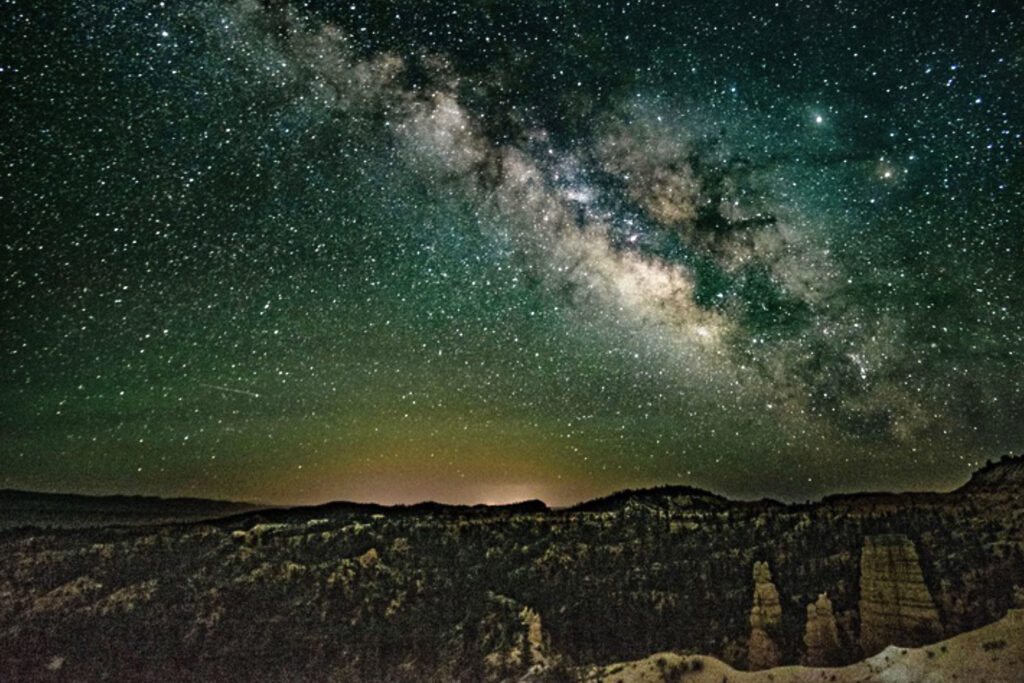