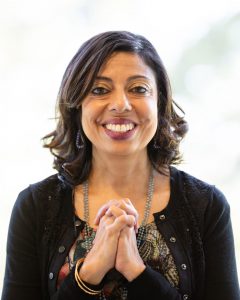 The College of Science is honored to welcome College of Science alumna, Dr. Monica Gandhi, BS’91 as our 2019 Convocation speaker. Dr. Ghandi is Professor of Medicine and Associate Division Chief (Clinical Operations/ Education) of the Division of HIV, Infectious Diseases, and Global Medicine at UCSF/ San Francisco General Hospital. She also serves as the medical director of the HIV Clinic at SFGH. Her work in HIV research and HIV education and mentorship has been recognized with a number of international awards including the HIV Congress, Lifetime HIV Merit Award in 2018.

Before HIV research–Monica was immersed in the University of Utah. Her father, Om, now aged 84, was a Professor of Electrical Engineering at the U for over 50 years, and former department chair. Says Monica, “I essentially grew up on campus.”

The health and social issues of the 1970s/80s helped define Dr. Gandhi’s career. “I was moved to enter HIV care by the struggles I witnessed firsthand” says Monica, “I also became interested in infectious diseases, which differentially affect the poor, after going to India several times and witnessing the stark contrast between rich and poor.”

After receiving her undergraduate degree in 1991, Dr. Gandhi completed her M.D. at Harvard Medical School and then came to the University of California San Francisco (UCSF) in 1996 for residency training in Internal Medicine. After her residency, Dr. Gandhi completed a fellowship in Infectious Diseases and a postdoctoral fellowship at the Center for AIDS Prevention Studies, both at UCSF. She also obtained a Masters in Public Health from Berkeley in 2001 with a focus on Epidemiology and Biostatistics. 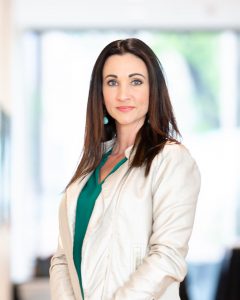 Originally from Wharton, Texas, Hollie transferred to the U, for undergraduate brain cancer research, population health sciences research, to study genetics, and to finish her Bachelor’s degree.

Following graduation, Hollie will begin her work on a PhD in Oncological Sciences, focusing on embryonal tumors of the Central Nervous System, here at the U this fall.

The College of Science Convocation ceremony is an opportunity for science graduates to be recognized individually, have their degrees conferred, and receive their diploma covers. 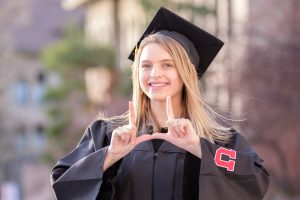 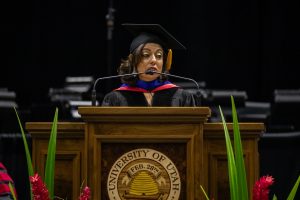 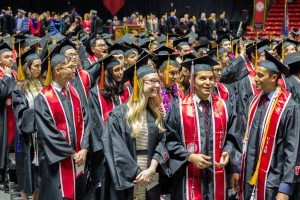 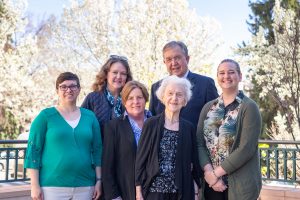