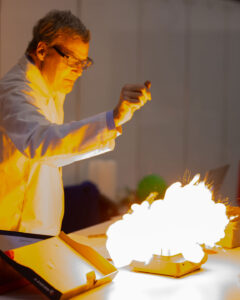 Join us to celebrate the power of science with the Utah’s most explosive holiday tradition!

This year, the event will be held LIVE in the Henry Eyring Chemistry Building, Room 2008.

For 37 years, the U Chemistry department’s Faraday Lectures have brought the community together. Join chemistry professors Janis Louie and Tom Richmond as they perform an extraordinary series of chemical experiments that educate and entertain audiences of all ages.