Mathematicians and engineers at the University of Utah have teamed up to show how ultrasound waves can organize carbon particles in water into a sort of pattern that never repeats. The results, they say, could result in materials called “quasicrystals” with custom magnetic or electrical properties.

The research is published in Physical Review Letters.

“Quasicrystals are interesting to study because they have properties that crystals do not have,” says Fernando Guevara Vasquez, associate professor of mathematics. “They have been shown to be stiffer than similar periodic or disordered materials. They can also conduct electricity, or scatter waves in ways that are different from crystals.” 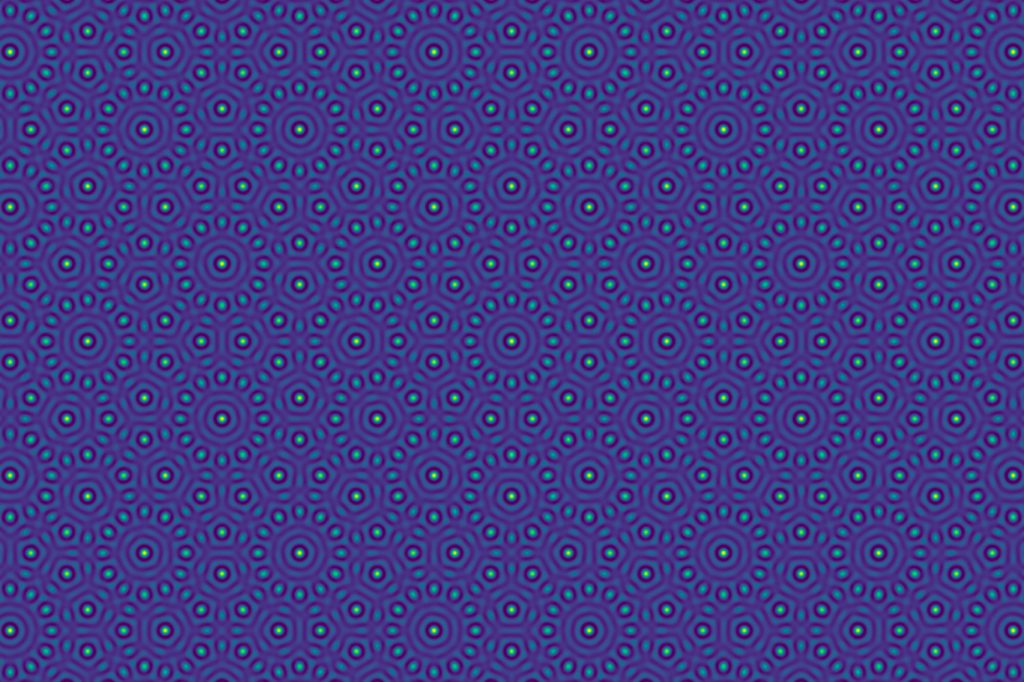 Picture a checkerboard. You can take a two-by-two square of two black tiles and two white (or red) tiles and copy and paste to obtain the whole checkerboard. Such “periodic” structures, with patterns that do repeat, naturally occur in crystals. Take, for example, a grain of salt. At the atomic level, it is a grid-like lattice of sodium and chloride atoms. You could copy and paste the lattice from one part of the crystal and find a match in any other part.

But a quasiperiodic structure is deceiving. One example is the pattern called Penrose tiling. At first glance, the geometric diamond-shaped tiles appear to be in a regular pattern. But you can’t copy and paste this pattern. It won’t repeat.

The discovery of quasiperiodic structures in some metal alloys by materials scientist Dan Schechtman earned a 2011 Nobel Prize in Chemistry and opened up the study of quasicrystals.

Since 2012, Guevara and Bart Raeymaekers, associate professor of mechanical engineering, have been collaborating on designing materials with custom-designed structures at the microscale. They weren’t initially looking to create quasiperiodic materials—in fact, their first theoretical experiments, led by mathematics doctoral student China Mauck, were focused on periodic materials and what patterns of particles might be possible to achieve by using ultrasound waves. In each dimensional plane, they found that two pairs of parallel ultrasound transducers suffice to arrange particles in a periodic structure.

But what would happen if they had one more pair of transducers? To find out, Raeymaekers and graduate student Milo Prisbrey (now at Los Alamos National Laboratory) provided the experimental instruments, and mathematics professor Elena Cherkaev provided experience with the mathematical theory of quasicrystals. Guevara and Mauck conducted theoretical calculations to predict the patterns that the ultrasound transducers would create.

Cherkaev says that quasiperiodic patterns can be thought of as using, instead of a cut-and-paste approach, a “cut-and-project” technique.

If you use cut-and-project to design quasiperiodic patterns on a line, you start with a square grid on a plane.  Then you draw or cut a line so that it passes through only one grid node. This can be done by drawing the line at an irrational angle, using an irrational number like pi, an infinite series of numbers that never repeats. Then you can project the nearest grid nodes on the line and can be sure that the patterns of the distances between the points on the line never repeats. They are quasiperiodic.

The researchers set up four pairs of ultrasound transducers in an octagonal stop sign arrangement. “We knew that this would be the simplest setup where we could demonstrate quasiperiodic particle arrangements,” Guevara says. “We also had limited control on what signals to use to drive the ultrasound transducers; we could essentially use only the signal or its negative.”

Into this octagonal setup, the team placed small carbon nanoparticles, suspended in water. Once the transducers turned on, the ultrasound waves guided the carbon particles into place, creating a quasiperiodic pattern similar to a Penrose tiling.

“Once the experiments were performed, we compared the results to the theoretical predictions and we got a very good agreement,” Guevara says.

The next step would be to actually fabricate a material with a quasiperiodic pattern arrangement. This wouldn’t be difficult, Guevara says, if the particles were suspended in a polymer instead of water that could be cured or hardened once the particles were in position.

“Crucially, with this method, we can create quasiperiodic materials that are either 2-D or 3-D and that can have essentially any of the common quasiperiodic symmetries by choosing how we arrange the ultrasound transducers and how we drive them,” Guevara says.

It’s yet to be seen what those materials might be able to do, but one eventual application might be to create materials that can manipulate electromagnetic waves like those that 5G cellular technology uses today. Other already-known applications of quasiperiodic materials include nonstick coatings, due to their low friction coefficient, and coatings insulating against heat transfer, Cherkaev says.

Yet another example is the hardening of stainless steel by embedding small quasicrystalline particles. The press release for the 2011 Nobel Prize in Chemistry mentions that quasicrystals can “reinforce the material like armor.”

So, the researchers say, we can hope for many new exciting applications of these novel quasiperiodic structures created by ultrasound particle assembly.