The Frontier of Physics

The Standard Model of particle physics is the theory that explains how the most elementary particles interact with each other and combine to form composite objects, like protons and neutrons. Developed over the course of many decades, what we know as the Standard Model today was formulated nearly half a century ago and remains a focus of study for particle physicists. But by itself, the Standard Model fails to provide an explanation for many important phenomena, such as the existence of the dark matter in the universe. 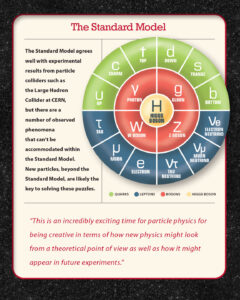 Today, physicists and researchers are on the frontier in the search for physics beyond the Standard Model, using connections between theoretical particle physics, cosmology, and astrophysics to help us understand the universe.

Pearl Sandick, Associate Professor of Physics and Astronomy and Associate Dean of Faculty Affairs for the College of Science, is on that frontier. As a theoretical particle physicist, she studies some of the largest and smallest things in the universe, including dark matter, which is the mysterious stuff that gravitationally binds galaxies and clusters of galaxies together.

In August 2019, Sandick and her colleagues hosted a workshop entitled “The Search for New Physics—Leaving No Stone Unturned,” which brought together dozens of particle physicists, astrophysicists, and cosmologists from around the world to discuss recent advances and big ideas. “It was such a vibrant environment; I think it helped us all broaden our perspectives and learn new things. Though there’s a lot going on in the meantime, we’re already excited about the prospect of hosting a second “No Stone Unturned” workshop in the new Science Building.”

Recently, Sandick has turned her attention to another cosmological phenomenon—black holes—tackling the question of how their existence affects our understanding of dark matter and other physics beyond the Standard Model.

“Some of this new research makes use of the cosmic microwave background (CMB), which is leftover radiation from the Big Bang that we can observe today,” said Sandick.

“CMB measurements can help us understand the structure and composition of the universe, including how much is made of dark matter. The CMB also can provide hints about what other particles or objects existed in the early universe.”

Before the CMB was created, the universe was very hot and very dense. In this environment, the densest places would have collapsed to become black holes. The black holes that formed in this way are called primordial black holes (PBHs), to differentiate them from black holes that form much later when stars reach the end of their lives. Heavy enough PBHs would still be around today and could make up some or all of the dark matter, providing an alternative to the idea that dark matter is a new particle. Lighter PBHs probably are not an explanation for dark matter, but they would have had an important interplay with dark matter and other new particles.

Sandick, along with a U of U postdoctoral associate, Barmak Shams Es Haghi, have been looking into the many impacts of a population of light PBHs in the early universe. Recently, they’ve completed the first precision study of some spinning PBHs in the early universe, finding that current CMB measurements from the Planck satellite (an observatory operated by the European Space Agency) and future measurements with the CMB Stage 4 experiment at the South Pole and in the Chilean desert are sensitive to many important PBH scenarios. The Planck data already point to some more and less likely possibilities, while CMB Stage 4 will be an important step forward in understanding the life and death of small black holes.

In addition to her research, Sandick is passionate about teaching, mentoring, and making science accessible and interesting. She has been recognized for her teaching and mentoring work, with a 2016 University of Utah Early Career Teaching Award and a 2020 University of Utah Distinguished Mentor Award. In 2020, she also was named a U Presidential Scholar. Women are still widely underrepresented in physics, and Sandick is actively involved in organizations that support recruitment, retention, and advancement of women physicists. She has served on the American Physical Society (APS) Committee on the Status of Women in Physics and as the Chair of the National Organizing Committee for the APS Conferences for Undergraduate Women in Physics. She is currently chair of the APS Four Corners Section, which serves approximately 1,800 members from the region. In 2011, she founded a group to support women in the Department of Physics and Astronomy and continues to serve as their faculty advisor.