On June 13, 2022, Environmental Defense Fund unveiled Air Tracker, a first-of-its-kind web-based tool that allows users to plot the likely path of air pollution. Run on real-time, trusted scientific models and coupled with air pollution and weather data and developed in partnership with the University of Utah and the CREATE Lab at Carnegie Mellon University, Air Tracker helps users learn more about the air they’re breathing, including pollution concentrations and its potential sources.

U professor John Lin, of the Department of Atmospheric Sciences, adapted his research group’s atmospheric model (the Stochastic Time-Inverted Lagrangian Transport model, or STILT) to run as part of Air Tracker. 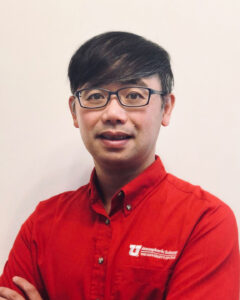 “Air Tracker is designed to trace our potential source regions for pollution. Users can make use of Air Tracker to investigate emission sources with a research-grade atmospheric model at their fingertips.”

“Air quality monitors can show us how polluted our air is, but they aren’t equipped to tell us what is causing the pollution,” says Tammy Thompson, Senior Air Quality Scientist and creator of the tool. “With Air Tracker, we’re able to see likely sources of pollution hotspots, which is especially helpful in cities where a variety of emitters contribute to overall air quality.”

Users can click anywhere on maps of Houston, Salt Lake City and Pittsburgh to create a “source area,” which shows the most likely origin of the air they’re breathing at any given time. They can also click on locations of individual air quality sensors to show real-time and historical fine particle (PM2.5) pollution readings, wind speed and direction.

In Houston, for example, where a lack of zoning has allowed industrial sources to operate near communities with homes, schools, churches and hospitals, Air Tracker uses both real-time and historical data to show how different sources contribute to poor air quality at different dates and times.

“Breathing dirty air is bad for our health, and these health effects are not distributed equally,” said Sarah Vogel, EDF Senior Vice President, Healthy Communities. “The poorer and more disadvantaged groups disproportionately suffer the greater exposures and health impacts from air pollution. We hope community leaders and individuals will use this pollution data to hold polluters accountable and advocate for clean air policy change.”

In addition to learning more about the sources likely influencing the air they breathe, Air Tracker users can also use the real-time source area identification to help speed mitigation and help spot and control emissions resulting from accidents and unusual events. Through its “Share” feature, users can take screenshots of source areas to send to regulators and local officials.

Air Tracker is part of EDF’s ongoing work to better understand local air pollution, its behavior and its impacts. Air Tracker can be adapted to include additional pollutants and used in other cities around the world, including those that may not yet feature extensive, hyper-local air quality monitoring programs.

One of the world’s leading international nonprofit organizations, Environmental Defense Fund creates transformational solutions to the most serious environmental problems. To do so, EDF links science, economics, law, and innovative private-sector partnerships. With more than 3 million members and offices in the United States, China, Mexico, Indonesia and the European Union, EDF’s scientists, economists, attorneys and policy experts are working in 28 countries to turn our solutions into action. Connect with us on Twitter @EnvDefenseFund.

by Paul Gabrielsen, first published in @theU. Adapted from a release by the Environmental Defense Fund.