The three-year fellowship is awarded to support future leaders in mathematics and statistics by helping them participate in postdoctoral research that will enhance their development.

Rasmussen is a Research Assistant Professor in the department. “I’m very grateful to be recognized for my research and to the people who helped me along the way, including my advisors, collaborators, mentors, and teachers,” he said. “The award will allow me to devote more time to my research program. In addition, it will enable me to take on more activities to serve the math community, such as mentoring undergraduates and organizing conferences.”

A bunch of symmetries form a group, and a group can be thought of as symmetries of many different negatively curved spaces at the same time. A large part of Rasmussen’s research is spent on classifying the different spaces associated to one group. He finds the subject interesting because it allows him to draw pictures, engage his creative and aesthetic senses, and use tools from other fields, such as commutative algebra. 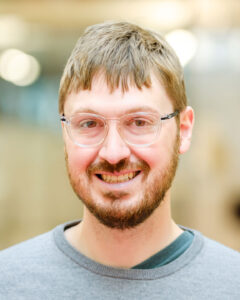 "I’m very grateful to be recognized for my research and to the people who helped me along the way, including my advisors, collaborators, mentors, and teachers."

In high school, he wasn’t especially interested in math. He did well at it but found it somewhat dry and mechanical. His first math class at Colby College was a multivariable calculus class taught by Scott Taylor, Associate Professor and Department Chair. Taylor used pictures of curves and surfaces in his teaching. This was a revelation to Rasmussen, who began to discover the beauty, depth, and creativity of math. From that point on, he took more math classes.

He has a few research goals he’d like to work on over the next few years. These include classifying hyperbolic actions of metabelian groups and classifying geodesic laminations on infinite type surfaces. Metabelian groups are a wide class of relatively simple groups that can still have complicated hyperbolic actions. Geodesic laminations are 1-dimensional objects on surfaces consisting of long straight lines interacting in complicated ways. “These are pretty hard problems that will keep me busy for a while. Along the way, many other related problems will pop up naturally,” he said.