Scientists in the Cherenkov Telescope Array (CTA) consortium today announced at the 236th meeting of the American Astronomical Society (AAS) that they have detected gamma rays from the Crab Nebula using a prototype Schwarzschild-Couder Telescope (pSCT), proving the viability of the novel telescope design for use in gamma-ray astrophysics. University of Utah faculty and staff in the Department of Physics & Astronomy are key members of the international research team announcing this technological breakthrough.

“The Crab Nebula is the brightest steady source of TeV, or very-high-energy, gamma rays in the sky, so detecting it is an excellent way of proving the pSCT technology,” said Justin Vandenbroucke, associate professor, University of Wisconsin. “Very-high-energy gamma rays are the highest energy photons in the universe and can unveil the physics of extreme objects including black holes and possibly dark matter.”v

Detecting the Crab Nebula with the pSCT is more than just proof-positive for the telescope itself. It lays the groundwork for the future of gamma-ray astrophysics. “We’ve established this new technology, which will measure gamma rays with extraordinary precision, enabling future discoveries,” said Vandenbroucke. “Gamma-ray astronomy is already at the heart of the new multi-messenger astrophysics, and the SCT technology will make it an even more important player.”

The use of secondary mirrors in gamma-ray telescopes is a leap forward in innovation for the relatively young field of very-high-energy gamma-ray astronomy, which has moved rapidly to the forefront of astrophysics. “Just over three decades ago, TeV gamma rays were first detected in the universe, from the Crab Nebula, on the same mountain where the pSCT sits today,” said Vandenbroucke. “That was a real breakthrough, opening a cosmic window with light that is a trillion times more energetic than we can see with our eyes. Today, we’re using two mirror surfaces instead of one, and state-of-the-art sensors and electronics to study these gamma rays with exquisite resolution.”

The initial pSCT Crab Nebula detection was made possible by leveraging key simultaneous observations with the co-located VERITAS (Very Energetic Radiation Imaging Telescope Array System) observatory. “We have successfully evolved the way gamma-ray astronomy has been done during the past 50 years, enabling studies to be performed in much less time,” said Wystan Benbow, director, VERITAS. “Several future programs will particularly benefit, including surveys of the gamma-ray sky, studies of large objects like supernova remnants, and searches for multi-messenger counterparts to astrophysical neutrinos and gravitational wave events.” 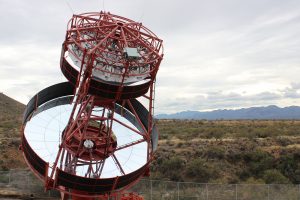 Located at the Fred Lawrence Whipple Observatory in Amado, Arizona, the pSCT was inaugurated in January 2019 and saw first light the same week. After a year of commissioning work, scientists began observing the Crab Nebula in January 2020, but the project has been underway for more than a decade.

“We first proposed the idea of applying this optical system to TeV gamma-ray astronomy nearly 15 years ago, and my colleagues and I built a team in the U.S. and internationally to prove that this technology could work,” said Vladimir Vassiliev, principal investigator, pSCT. “What was once a theoretical limit to this technology is now well within our grasp, and continued improvements to the technology and the electronics will further increase our capability to detect gamma rays at resolutions and rates we once only ever dreamed of.”

David Kieda, professor at the U and dean of the Graduate School, was principal investigator of the U pSCT team and system engineer of the telescope. Along with Harold Simpson, facilities director of the U’s Department of Physics & Astronomy, and graduate research assistant Ahron Barber, Kieda led the design and fabrication of multiple auxiliary systems for the telescope:  sun protection, signal cable, power and communication systems and the specification and selection of the telescope’s drive system. The Utah team also solves a big problem—how to keep the telescope’s sophisticated high speed  camera cool.

“The camera is like a racecar engine the size of the toaster—it generates a lot of heat,” Kieda said. “We can’t vent the heat near the camera because that would distort the local air and affect the telescope performance. So we came up with a sophisticated cooling system using high capacity heat exchangers and fans in the camera, cooled by a remotely located chilled water supply.”

Kieda was also tasked with integrating all the telescope subsystems originating from teams around the country into a workable system.

“I call this ‘putting  the ship in the bottle’. It’s the same thing building cameras—how do I actually get the pieces together correctly?” Kieda said. “The telescope camera weighs nearly a thousand pounds. You have to stage the lifts, position it, and install it in tight quarters without damaging the secondary mirrors , while keep everybody safe. It was a challenge—this is the first time anyone has built this type of telescope.”

The pSCT was made possible by the contributions of thirty institutions and five critical industry partners across the United States, Italy, Germany, Japan, and Mexico, and by funding through the U.S National Science Foundation Major Research Instrumentation Program.

“That a prototype of a future facility can yield such a tantalizing result promises great things from the full capability, and exemplifies NSF’s interest in creating new possibilities that can enable a project to attract wide-spread support,” said Nigel Sharp, program manager, National Science Foundation.

Now demonstrated, the pSCT’s current and upcoming innovations will lay the groundwork for use in the future Cherenkov Telescope Array observatory, which will host more than 100 gamma-ray telescopes. “The pSCT, and its innovations, are pathfinding for the future CTA, which will detect gamma-ray sources at around 100 times faster than VERITAS, which is the current state of the art,” said Benbow. “We have demonstrated that this new technology for gamma-ray astronomy unequivocally works. The promise is there for this groundbreaking new observatory, and it opens a tremendous amount of discovery potential.”

The SCT optical design was first conceptualized by U.S. members of CTA in 2006, and the construction of the pSCT was funded in 2012. Preparation of the pSCT site at the base of Mt. Hopkins in Amado, AZ, began in late 2014, and the steel structure was assembled on site in 2016. The installation of the pSCT’s 9.7-m primary mirror surface —consisting of 48 aspheric mirror panels—occurred in early 2018, and was followed by the camera installation in May 2018 and the 5.4-m secondary mirror surface installation—consisting of 24 aspheric mirror panels—in August 2018. Scientists opened the telescope’s optical surfaces and observed first light in January 2019. It began scientific operations in January 2020.  The SCT is based on a 114 year-old two-mirror optical system first proposed by Karl Schwarzschild in 1905, but only recently became possible to construct due to the essential research and development progress made at the Brera Astronomical Observatory, the Media Lario Technologies Incorporated and the Istituto Nazionale di Fisica Nucleare, all located in Italy. pSCT operations are funded by the National Science Foundation and the Smithsonian Institution.

CTA is a global initiative to build the world’s largest and most sensitive very-high-energy gamma-ray observatory consisting of about 120 telescopes split into a southern array at Paranal, Chile and a northern array at La Palma, Spain. More than 1,500 scientists and engineers from 31 countries are engaged in the scientific and technical development of CTA. Plans for the construction of the observatory are managed by the CTAO gGmbH, which is governed by Shareholders and Associate Members from a growing number of countries. CTA will be the first ground-based gamma-ray astronomy observatory open to the worldwide astronomical and particle physics communities. *Adapted from a release written by Amy Oliver, Fred Lawrence Whipple Observatory.