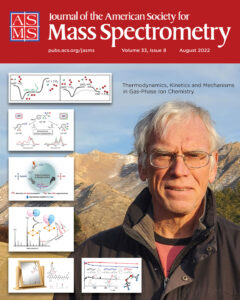 Journal of the American Society for Mass Spectrometry

An Appreciation for, and an Interview with, Professor Peter B. Armentrout.

Peter B. Armentrout the Henry Eyring Presidential Endowed Chair of Chemistry at the University of Utah is the 2021 recipient of the John B. Fenn Award for Distinguished Contribution in Mass Spectrometry.

It is a pleasure to introduce a special focus of the Journal of the American Society for Mass Spectrometry to celebrate the accomplishments of Prof. Peter B. Armentrout, Henry Eyring Presidential Endowed Chair of Chemistry, University of Utah, on the occasion of his receiving the 2021 ASMS John B. Fenn Award for a Distinguished Contribution in Mass Spectrometry. The award recognizes Peter’s development of (1) robust experimental and statistical techniques for the determination of accurate thermochemistry via the guided ion beam method, which has provided insights into the thermochemistry, kinetics, and dynamics of simple and complex chemical reactions, and (2) a suite of software programs for statistically modeling the energy dependence of product formation. As a consequence of these developments, nearly 2500 distinct bond energies have been measured during his career. These fundamental measurements have impact in many fields, including catalysis, biochemistry, surface chemistry, organometallic chemistry, and plasma chemistry.

This issue contains a total of 14 papers around the theme of “Thermodynamics, Kinetics and Mechanisms in Gas-Phase Ion Chemistry”. We thank all of the authors and reviewers for helping this issue come to fruition.

Although Peter’s achievements have been documented in other editorials (1−4) and he has written a short autobiography, (5) here we asked Peter some questions on issues that have intrigued us (note: this interview is a COVID19 “timecapsule” as it was carried out in mid-2021 during the height of lockdowns and travel bans):

Question 1: Many of us were inspired to pursue science by our high school teachers. In your autobiography, (5) you mentioned that you had excellent chemistry and physics teachers at Oakwood High School, Dayton, OH. Did they help ignite a spark, or were you already doing experiments at home before then?

PBA answer: You know I was never one to really do experiments at home. I had a home chemistry set (with lots of dangerous chemicals that people would be horrified to give to kids these days), but I mainly mixed them up to generate goo and never followed the recipes given. However, I was always interested in how things worked and knew I would be a scientist shortly after I gave up the prospect of being a professional pony express rider (in the fifth grade or so).

Question 2: I enjoyed reading about your early research with the late Rob Dunbar (Case Western Reserve University) and with Jack Beauchamp (Caltech). (5) Since then, you have had a wonderfully productive career. What is your favorite piece of work that you have been involved in?

PBA answer: It is not often you get a call out of nowhere asking if you can do an experiment, but Al Viggiano did just that several years back. Turns out the Metal Oxide Space Cloud (MOSC) group at the Air Force Research Laboratory was interested in samarium chemistry. They needed to know the bond energy of SmO+ with more precision and accuracy than was available in the literature. I told him we would try to measure this if they bought us the samarium sample, which turned out to cost $200. Apparently, Al went to the MOSC group and said I would do the research but it would cost 200. They hesitated until they learned he did not mean $200K. We successfully measured the SmO+ bond energy, (6) which enabled them to understand an ongoing atmospheric test. Subsequently, this has led to grants that enable us to continue studying the oxidation of lanthanides, including revisiting the Sm system. I’m not sure that many scientists would have thought that understanding simple gas-phase diatomic molecules better is still an important avenue for research. 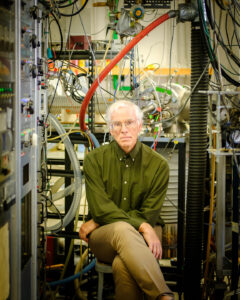 Armentrout in the lab.

Question 3: What is the role of a mentor in science? Who mentored you and what has been your style of mentoring?

PBA answer: The enterprise of chemistry is a complex and detailed world, with lots of places where you can go astray. The role of a mentor is to alert a student of chemistry about some of the realities of getting things done and provide guidance. My mentors were Jack Beauchamp, Rob Dunbar, and John Fackler (inorganic chemist at Case and then Texas A&M). Like them, I tell my students that they work with me, not for me. I’m largely a hands-off mentor who provides advice and direction but willingly become hands-on when the situation needs it. I try to make sure my students not only learn to take good data and analyze it but also to present it clearly in both written and oral venues. My door (these days, my email box) is always open.

Question 4: What are the challenges for young scientists?

PBA answer: There are so many. I’m not sure the challenges have changed over the years, but I do think they have intensified. Funding, life–work balance, just dealing with students and people, they all need work to make happen. One could imagine that finding a new scientific niche that you can be the expert in has become harder because all the “easy” targets have already been taken. This belief neglects the fact that new techniques and new technologies provide new opportunities, but that does not make them any easier to identify. When I started out, I realized that if only I could understand and control things better, then I really ought to be able to measure thresholds of reactions and learn not only some thermochemistry but also something about the dynamics and mechanisms of reactions. I identified radio frequency (rf) manipulations as a means to improve the technology considerably and that led to the very first guided ion beam tandem mass spectrometer that my group built at UC Berkeley. In subsequent years, we have also thought hard about how to interpret the kinetic energy dependence of reactions that has enabled us to make a lot of progress along those lines over the years, but there is a lot we still do not know or understand as well as we might.

Question 5: What is the future of peer-review publishing? How are you personally coping with the ever-increasing number of scientific articles?

PBA answer: Honestly, I’m not sure I am successfully coping at all. The only saving grace is that you can almost instantaneously search the literature for relevant articles through the Internet. I still remember having to go to the library and search Chemical Abstracts in order to search the literature. An Internet search does not always find every relevant article, but it always finds more than you really want.

Question 6: 2020 was a rather strange and challenging year. This is reflected in the fact that the Oxford English Dictionary was not able to decide on a single “word of the year”. What is your “word of the year” to describe 2020 and why?

PBA answer: Interesting question. My short answer also involves multiple words: pandemic, virtual, remote. If I had to pick one, it would be remote. The last year has kept us apart in ways we never conceived of and yet brought us together (often using technology) in ways that have expanded the way we will go forward. It is been an interesting process but one that will hopefully provide benefits in the future.

Question 7: Mary Rodgers’ recounting anticipating brutal questions from the holy trinity of gas-phase ion chemists (Jack Beauchamp, Mike Bowers, and Peter Armentrout) at the 1993 Lake Arrowhead Conference resonated with me. (2) I too was warned that you guys had exquisite “BS” detectors. Thus, it was with trepidation that when John Bowie fell ill I presented his talk at the eighth Asilomar Conference on Mass Spectrometry in 1990. (7) That was the first time that I met you, Jack, and Mike and other leading gas-phase ion chemists. I learned a lot but was also impressed by the spirit of the questions, which were aimed at getting the most out of the science. I also felt that this community was welcoming and that there was a sense of fun. Given that COVID19 has curtailed travel and many conferences have been canceled or rescheduled, what are your thoughts about the future of conferences? Are face-to-face conferences still important?

PBA answer: The triumvirate did indeed have a well-deserved reputation, but you are spot on with regard to the intent of those questions. I’ve been to a few virtual conferences in the past year. They accomplish a fair bit of what is needed to communicate science to your peers. They reduce our carbon footprint and can enable many more people to attend than might otherwise be able to afford it. However, the personal interactions, the bump-into-you-in-the-hall moments, the scribbles on a napkin, are missing from virtual conferences. The ability to share a drink and dine with friends and speculate together provides real opportunities to advance science. The time away from your routine at home can be mind expanding. Face-to-face conferences remain relevant and needed.

Question 8: If you had a time machine, which scientist(s) from history would you like to meet? What would you ask them?

PBA answer: Leonardo da Vinci. I’ve always thought he was the epitome of the Renaissance man, doing both art and science that was well ahead of its time. In that regard, I think most people do not appreciate how much art and inspiration there is in doing good science. I would ask him where he derived his inspiration and why he ever thought man could fly.

Question 9: Much of your work focuses on thermodynamics, with the 2013 tribute (4) mentioning over 2000 distinct bond energies measured. What is the motivation for your intense interest, perhaps even obsession, with this aspect of chemistry?

PBA answer: I have always valued the quantitative aspects of chemistry. I can recall early in my graduate career an interaction with the late Ben Freiser, then also a graduate student with Jack Beauchamp, where he took one of the pieces of thermochemistry I had recently measured and proceeded to break it down a number of different ways. Thermodynamics has an eternal quality to it: a good measurement will be valuable to many future generations. Thermodynamics is predictive; it can definitively tell you whether a reaction is possible or not. A recent example is a study that generated a fair bit of interest because it claimed to observe catalytic conversion of methane to ethene on gold dimer cations at temperatures as low as 200 K. The problem is that this reaction is endothermic by over 200 kJ/mol, which means it is impossible to catalyze at thermal energies. Collaborators and I investigated a number of alternative explanations for the observations. (8)

This article references 8 other publications. 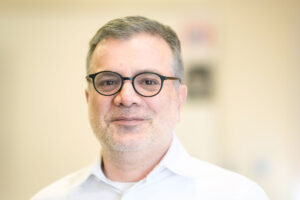 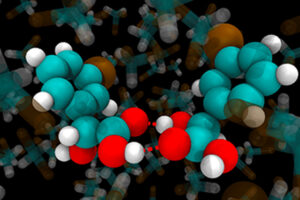