Priyam Patel, assistant professor of mathematics at the U, has received a National Science Foundation CAREER Award. The National Science Foundation's CAREER Award is the most prestigious NSF award for faculty members early in their careers as researchers and educators. It recognizes junior faculty members who successfully integrate education and research within their organizations. The award comes with a federal grant for research and education activities for five consecutive years. 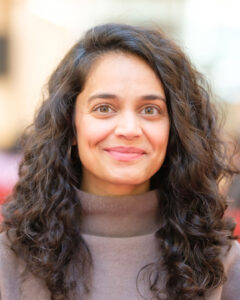 “I'm thrilled to receive the award, and I'm very excited to have the ability to pursue the research and educational projects the grant will afford,” said Patel. “The award also recognizes the support the Math Department and the University of Utah provide to faculty.”

Patel works in geometry and topology. The two areas differ in that geometry focuses on rigid objects where there is a notion of distance, while topological objects are much more fluid. In her research, Patel’s goals are to study and understand curves on surfaces, symmetries of surfaces, and objects called hyperbolic manifolds and their finite covering spaces. Topology and geometry are used in a variety of fields, including data analysis, neuroscience, and facial recognition technology. Patel’s research doesn’t focus on these applications directly since she works in pure mathematics.

She is currently working on problems concerning groups of symmetries of certain surfaces. Specifically, she has been studying the mapping class groups of infinite-type surfaces, which is a new and quickly growing field of topology. “It’s quite exciting to be at the forefront of it. I would like to tackle some of the biggest open problems in this area in the next few years, such as producing a Nielsen-Thurston type classification for infinite-type surfaces,” she said. She is also interested in the work of Ian Agol, professor of mathematics at Berkeley, who won a Breakthrough Prize in 2012 for solving an open problem in low-dimensional topology. Patel would like to build on Agol’s work in proving a quantitative version of his results. Other areas she’d like to explore are the combinatorics of 3-manifolds and the theory of translation surfaces.

Patel joined the Math Department in 2019.