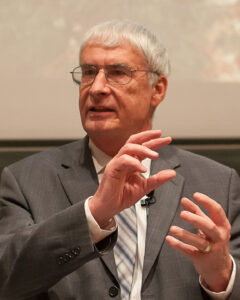 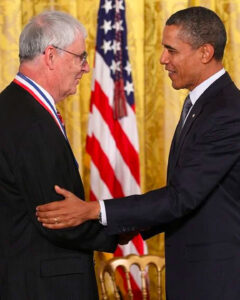 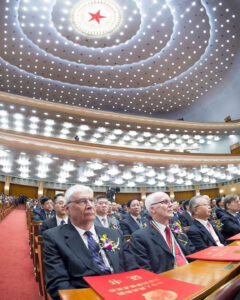 Seated in the Great Hall of the People in Beijing, China. 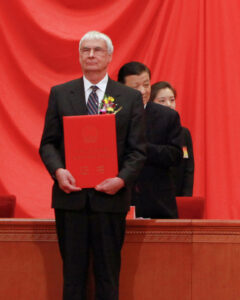 Peter Stang One of Clarivate's Most Cited Scientists.

Each year, Clarivate identifies the world’s most influential researchers ─ the select few who have been most frequently cited by their peers over the last decade. In 2022, fewer than 7,000, or about 0.1%, of the world's researchers, in 21 research fields and across multiple fields, have earned this exclusive distinction.

Peter Stang is among this elite group recognized for his exceptional research influence, demonstrated by the production of multiple highly-cited papers that rank in the top 1% by citations for field and year in the Web of Science.

Peter Stang was born in Nuremberg, Germany to a German mother and Hungarian father. He lived in Hungary for most of his adolescence. In school, he took rigorous mathematics and science courses. At home, he made black gunpowder from ingredients at the drugstore, and developed a pH indicator from the juice of red cabbage that his mother cooked, and sold to his "fellow chemists".

In 1956, when Stang was in the middle of his sophomore year in high school, he and his family fled the Soviet invasion of Hungary and immigrated to Chicago, Illinois. Not speaking English, Stang failed his American history and English courses but scored at the top of his class in science and math. His teachers were confused by his performance and gave him an IQ test. Stang was confused by the unfamiliar format of the test and scored a 78. In spite of this, Stang was admitted to DePaul University and earned his undergraduate degree in 1963. He received his Ph.D. in 1966 from the University of California, Berkeley.

After a postdoctoral fellowship at Princeton Universitywith Paul Schleyer, he joined the chemistry faculty at the University of Utah in 1969. He became dean of the College of Science in 1997 and stepped down as dean in 2007. He is a member of the National Academy of Sciences, The American Academy of Arts and Sciences and a foreign member of the Chinese Academy of Sciences. He was editor-in-chief of the Journal of Organic Chemistry from 2000 to 2001, and Editor-in-Chief of the ACS flagship journal, Journal of the American Chemical Society (2002-2020).