On Feb. 18, the world held its breath as NASA’s multibillion-dollar Perseverance Rover landed successfully on Mars to look for signs of life—and to prepare for future human explorers. The robotic rover traveled 300 million miles in six months, a massive effort that all came down to “seven minutes of terror,” named for the hair-raising descent that happens too quickly for radio signals to transmit from Mars to mission control—in other words, the rover is on its own. The car-sized craft crashed through the Martian atmosphere at 1,000 mph enduring temperatures as high as 3,800°F. Its heat shield dropped, plunging the rover into a free fall before a “sky crane” lowered Perseverance into the 28-mile-wide Jezero Crater on Mars (illustration shown in the header image).

U alum Thomas Stucky (B.S. ’15) was one of the millions of people glued to NASA’s live stream of the harrowing landing. Stucky is a KBRWyle engineer at NASA’s Ames Research Center where he wrote software for robotic drill arms similar to the ones on Perseverance, then tested them on extreme Earth locations that resemble the Martian landscape. Now, Stucky works on a computer simulation of the landscape of Europa, a moon of Jupiter, that acts as a testbed for Europa lander autonomy. He sat down with @theU to talk about Perseverance Rover, NASA’s most ambitious mission in decades.

What was going through your mind as you watched Perseverance Rover’s entry into Mars? 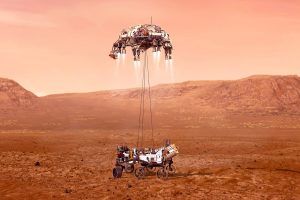 What went through my mind was my experience of the last time a rover landed on Mars: the Curiosity Rover in 2012. I was here at the University of Utah as an undergraduate, volunteering at a public watch party in the College of Science. I remember the dead silence that fell over an entire auditorium of people in wait of the heartbeat signal that indicated a safe landing. A silence that was punctuated with a ruckus of celebration moments later when mission control received the signal and confirmed Curiosity was safely on the ground. To see a room full of strangers all uniting and cheering for the accomplishments of a robotic explorer, and therefore the accomplishments of those who worked on it, was moving. It opened my eyes to the impact that space exploration can have on everyone.

Nearly a decade later, and several years of firsthand NASA experience under my belt, I watched this familiar sequence of events, but now with a new appreciation for the blood, sweat and tears that thousands of individuals from all around the globe had to contribute to make a mission like Perseverance a reality. Blood, sweat and tears that could all go poof at the slightest miscalculation.

What is Perseverance Rover’s mission on Mars?

Perseverance’s primary mission is to search for signs of ancient life that may once have thrived on a warmer Mars billions of years in the past. This is why it’s landing in the Jezero Crater at the site of an ancient river delta, which scientists think may have once flowed with liquid water. Due to the harsh radiation environment on the surface, it is unlikely that we’ll find current life without digging more than a meter underground. This ancient river delta may have deposited and preserved biosignatures in the form of organic molecules that we know are synthesized by life here on Earth. The landing site is also home to a number of steep cliffs, sand dunes, and boulder fields that will teach us more about Mars’ geological past. In astrobiology, biosignatures alone are not enough to prove life existed—the geological context that they are found in is needed to make conclusive statements about what sort of life may have once thrived there. For that reason, Perseverance is also equipped with a suite of scientific instruments to learn about Mars’ past climate and geologic history.

As if searching for ancients traces of Martian life and characterizing the geologic history of a planet wasn’t enough, Perseverance has a third objective as well; to conduct studies that will prepare for human exploration of Mars. There is an experiment on board that sounds right out of the movie, “The Martian.” It’s called MOXIE, or Mars Oxygen In-Situ Resource Utilization Experiment. It’s a device that absorbs carbon dioxide from the Martian atmosphere and synthesizes it into oxygen, which is a crucial technology for future Mars explorers to produce both breathable air and rocket fuel. Perseverance also carries the Mars Environmental Dynamics Analyzer to characterize Mars weather and gain a better understanding of the dangers that will face future human and robotic explorers alike.

The rover will drill into Mars’ surface to collect and store soil and rock samples. What can these tell us about life on Mars?

Lots of things! Rocks contain within them the chemical history of a world. They hold the key to understanding Mars’ past. Perseverance is equipped with a suite of instruments that will measure both the organic and geological chemical makeup of Mars rocks and their morphologies to answer questions like: “How warm was Mars?” “How wet was Mars?”; “How briny were its ancient rivers?” and the big one, “Did Mars’ ever harbor life?” 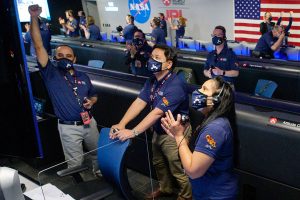 Inside NASA's Mission Control at in Southern California.

The instrument that may shed the most light on the question of life on Mars, is SHERLOC, or Scanning Habitable Environments with Raman & Luminescence for Organics & Chemicals. SHERLOC is designed to tell us what minerals and organic molecules are present in a drilled sample of rock. Not all organic molecules are considered biosignatures, but SHERLOC is able to show us the distribution of different molecules within a sample. For instance, a high concentration of organics in a particular region of a sample might suggest that an ancient microbial community once thrived there. Further analysis will have to be done to confirm definitively if SHERLOC detects biosignatures, which is why Perseverance’s robotic arm will be capable of caching promising samples for retrieval by another NASA mission down the line. These candidate samples that Perseverance will collect and store on board may very well contain conclusive evidence of life on Mars, but we will still have to wait and find out.

You develop software for robotic drills and test those drilling capabilities on Mars-like surfaces here on Earth. What are some challenges in remote drilling on another planet?

Drilling is all about paying attention to how the material affects the drill and adjusting accordingly. If you’ve ever used a hand drill on a piece of lumber, you know that you could encounter a change in the wood grain that jams the drill bit. If you get your drill bit stuck in a piece of wood here on Earth, no big deal. Just walk to the local hardware store and buy another, or pry it out of the wood. If the drill bit attached to your rover gets stuck while on Mars, then the whole mission is a bust.

The drill assembly on the end of Perseverance’s robotic arm holds nine drill bits, and among them is a coring bit that can extract half-inch diameter cylinders of Martian rock up to 2.4 inches deep. By acquiring a sample at this depth, Perseverance will be able to assess it for biosignatures of extinct life; however, future missions might need to dig even deeper into Mars in order to find life that may presently thrive meters under the surface protected from harmful radiation. The difficulty of drilling exponentially increases with drilling depth, which means tackling these problems is crucial to finding extant life on Mars.

How does testing technology on Earth help identify and address these issues?

It’s important that the rover’s own systems are able to monitor the drilling telemetry and make decisions in real-time on its own. A human operator on Earth could control the drill through sensors that read the motor torque and weight, but Mars is so far away that even light-speed communication is too slow for real-time control. Any drill telemetry that the operator sees are already 20 minutes old, and any fault they attempt to avoid has likely already caused damage to the system or resulted in a stuck bit. A stuck bit… on another planet… with no hardware stores… it’s every DIYers worst nightmare.

That is what my work at NASA has been about. I worked on a 1-meter-long robotic drill, which we tested on a variety of rocks at locales all around the globe that have landscapes similar to Mars. I learn about all the possible ways that a drill can fail, and how to teach the rover to recover any drill failure by using only the feedback and controls that a robotic explorer would have access to.

How did your time at the U influence your career path?

I started my journey at the U only being sure that I wanted to study physics. By the end of my undergraduate career, thanks largely in part to the wonderful faculty in the Department of Physics & Astronomy, what I gained was a newfound passion for space research. When I was a student, I volunteered at the Wednesday night star parties held at the South Physics Observatory on the roof of the physics building. I saw how stargazing changes a person’s perception of their world and their place inside of it. Sure it may make us feel small in size, but that’s important in a way. Like we have something to offer this great big universe: an understanding of itself. Although we all collectively inhabit a pale blue dot, our true, long-lasting imprint will not be in how far we expand or how tall we build, it will be in the lessons, both scientific and cultural, that we learn along the way.