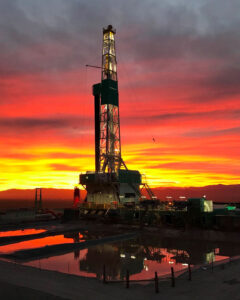 The Frontier Observatory for Geothermal Research

There is something deceptively simple about geothermal energy. The crushing force of gravity compacts the earth to the point where its molten metal center is 9,000 degrees Fahrenheit. Even thousands of miles out near the surface, the temperature is still hundreds of degrees.

In some places, that heat reaches the surface, either as lava flowing up through volcanic vents, or as steaming water bubbling up in hot springs. In those places, humans have been using geothermal energy since the dawn of time.

But what if we could drill down into the rock and, in essence, create our own hot spring? That is the idea behind “enhanced geothermal systems,” and the most promising such effort in the world is happening in Beaver County.

Called Utah FORGE (Frontier Observatory for Geothermal Research), the site 10 miles north of Milford is little more than a drill pad and a couple of buildings on Utah School and Institutional Trust Lands Administration land. But it is the U.S. Department of Energy’s foremost laboratory for enhanced geothermal research, and the University of Utah is the scientific overseer. Seven years ago, the U of U’s proposal won out in a national competition against three of the DOE’s own national laboratories.

“If you have to pick the best area in the country to build an EGS plant, you’re going to be driven to Milford. DOE recognized that in 2015,” said Joseph N. Moore, a University of Utah Professor with the Department of Geology & Geophysics and the principal investigator for Utah FORGE. 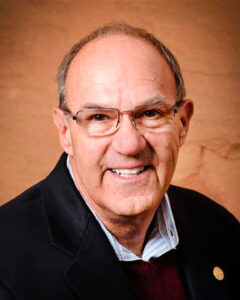 DOE has invested $50 million in FORGE, and now it’s adding another $44 million in research money. The U of U is soliciting proposals from scientists.

“These new investments at FORGE, the flagship of our EGS research, can help us find the most innovative, cost-effective solutions and accelerate our work toward wide-scale geothermal deployment and support President Biden’s ambitious climate goals,” said Energy Secretary Jennifer Granholm.

The idea is to drill two deep wells more than a mile down into solid granite that registers around 400 degrees. Then cold water is pumped down one well so hot water can be pulled out through the second well. One of those wells has been drilled, and the second is planned for next year.

But if it’s solid rock, how does the water get from one well to the other? The scientists have turned to a technology that transformed the oil and gas industry: hydraulic fracturing, also known as “fracking.” They are pumping water down under extremely high pressures to create or expand small cracks in the rock, and those cracks allow the cold water to flow across the hot rock to the second well. They have completed some hydraulic fracturing from the first well.

Moore is quick to point out that using a fracturing process for geothermal energy does not produce the environmental problems associated with oil and gas fracking, largely because it doesn’t generate dirty wastewater and gases. Further, the oil released in the fracturing can lubricate underground faults, and removing the oil and gas creates gaps, both of which lead to more and larger earthquakes. 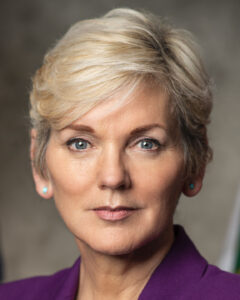 The fracturing in enhanced geothermal does produce seismic activity that seismologists are monitoring closely, Moore said, but the circumstances are much different. In geothermal fracturing, there is only water, and it can be returned to the ground without contamination. And producing fractures in an isolated piece of granite is less likely to affect faults. The hope, he said, is that once there are enough cracks for sufficient flow from one pipe to the other, it can produce continuous hot water without further fracturing.

And it never runs out. Moore said that even 2% of the available geothermal energy in the United States would be enough the power the nation by itself.

This next round of $44 million in federal funding is about taking that oil and gas process and making it specific to enhanced geothermal. That includes further seismic study, and coming up with the best “proppant” — the material used to keep the fracture open. Oil and gas use fracking sand to keep the cracks open, and the higher temperatures of geothermal make that challenging.

“FORGE is a derisking laboratory,” said Moore, meaning the U of U scientists, funded by the federal government, are doing some heavy lifting to turn the theory of EGS into a practical clean-energy solution. He said drilling wells that deep costs $70,000 a day. They drill 10 to 13 feet per hour, and it takes six hours just to pull out a drill to change the bit, something they do every 50 hours. That early, expensive work makes it easier for private companies to move the technology into a commercially viable business. Moore said all of the research is in the public domain.

Moore said FORGE doesn’t employ many full-time employees in Beaver County at this point, but it has used local contractors for much of the work, and it has filled the county’s hotel rooms for occasional meetings. High school students have also been hired to help with managing core samples from the deep wells.

“They’ve collaborated really well with the town,” said Milford Mayor Nolan Davis. Moore and others have made regular presentations to his city council, and they’ve sponsored contests in the high school to teach students about geothermal energy. People in town, Davis said, are well aware that the world is watching Utah FORGE, and there is hope geothermal energy will become a larger presence if and when commercial development begins. “We hope they can come in and maybe build several small power plants.”

Davis also noted that the power from Beaver County’s solar and wind plants are already contracted to California. “We’d like to get some power we can keep in the county.”

This story is part of The Salt Lake Tribune’s ongoing commitment to identify solutions to Utah’s biggest challenges through the work of the Innovation Lab.