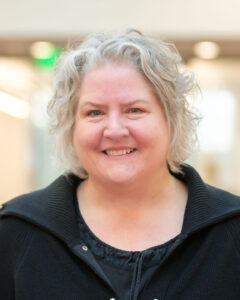 Vicki Nielsen, Accountant in the Department of Physics & Astronomy, has received a Staff Excellence Award from the College of Science.

“It’s an honor and very exciting to be selected by the College for this special recognition,” said Nielsen. “I’m humbled by the nomination. I’ve received kudos at other jobs but nothing compared to this extraordinary award. Excellence is a word I take seriously, and this a goal to which I will continue to aspire for the Physics Department and the College of Science!”

Nielsen came to accounting through a circuitous route—originally she graduated with a Bachelor of Fine Arts in Theatre from the U in 1994. She was lucky enough to work and gain practical experience in Pioneer Theatre Company’s costume shop for several years as a student and after graduation. She had always wanted to experience living outside Utah, so she left to backpack across Europe. Eventually she returned to the states, moved to Oregon, and worked different temporary jobs. When she returned to Utah, two genealogy companies she had worked for before hired her to perform searches at the Family History Library for customers and professional genealogists. A close friend who worked in the accounting area in the Department of Physics & Astronomy told Nielsen about a secretarial job opening.

“This was 2006, and it was one of the first group interviews I had, which I found exciting and challenging,” said Nielsen. Once she was hired and began working as a secretary, she was offered part-time work in accounting and, eventually, full-time with payroll duties. “My supervisor at the time said she trusted me with those duties and that gave me confidence. All my work experience has helped me in becoming competent at meeting deadlines, getting tasks accomplished quickly and correctly, and finding fulfillment in helping people”

In her current role, Nielsen communicates with supervisors and new employees throughout the hiring process. She initiates student job changes through HR every semester and department job changes for the new fiscal year. She also works with HR in off-boarding employees to help with a smooth transition as they leave the U. She has frequent interaction with the  U’s office of  International Student & Scholar Services regarding work authorization for department employees.  In addition, she is involved with the department’s graduate program and has a general knowledge of all the business services provided in the Accounting Department.

Nielsen enjoys working in the department, and she values the inclusion and support she finds. She also respects the emphasis on and support for education. “I really love working with all the impressive people in the department who have such insight and drive,” she said. “In turn, I hope this is reflected in how I help people.”