Julie Jung has received an Outstanding Post-Doctoral Fellow Award from the College of Science.

Julie Jung spent much of her time in high school roaming greenhouses working for a wheat lab at the USDA. Since then, she has pivoted her research to ecology, having worked first with owls, songbirds, chipmunks and pollinators within New England's deciduous forests.

Following graduation with honors in Biology from Williams College, Jung found herself on a plane to Panama to do field work at the Smithsonian Tropical Research Institute as a graduate student in biology. There she spent the next several rainy seasons studying how red-eyed treefrogs escape hatch in response to snake vibrations. 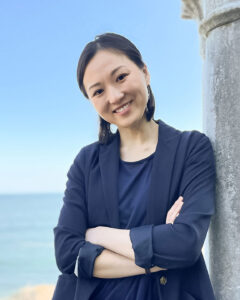 "I was so excited to have been peed on by a titi monkey while walking to lab."

"I was so excited to have been peed on by a titi monkey while walking to lab," she remembers. During the course of getting her doctorate from Boston University, Jung slowly grew into her role as a behavioral biologist.

As winner of this year's College of Science's "Outstanding Post-Doc Award," Jung has found a scientific home in the Werner Lab still studying the phenomenon of "phenotypic plasticity"—or how the same genotype produces distinct phenotypes depending on environmental conditions—but this time in nematodes.

Jung's NSF-funded research hopes to establish a general model of plasticity across diverse systems. The pivot from field to bench work has been jarring but only partial—as she and her lab members still get out to the Great Salt Lake to collect soil specimens.

Outside of research, Julie Jung loves to climb mountains and practice the salsa dancing skills she picked up in Panama.