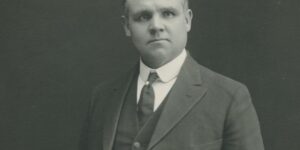 James E. Talmage-scholar, scientist, educator, author, and church leader, was born in England and came to Utah when he was ten years old. He earned the A.B degree at Lehigh University and the Ph.D at Illinois Wesleyan University. For his work in chemistry and geology he was elected to membership in the Royal Society of Edinburgh. He gave vigorous leadership to the University as Professor of metallurgy and biology, as Deseret professor of geology and as the University’s second president from 1894 to 1897. His major educational concern was to build a sound system of teaching for the people of Utah who, in the 1880’s were still somewhat remote from the established centers of learning, and to incorporate into the University curriculum the expanding body of scientific knowledge.

For members of the Church of Jesus Christ of Latter-day Saints, Talmage is well-known as a member of the Quorum of the Twelve church leadership where he served from 1911 until his death in 1933. He is also well-known as author of the book "Jesus the Christ," among other Mormon theological tomes.

The land on which this building stands was deeded to the University during President Talmage’s administration. Construction of the building, to be known as the Museum, was begun in 1900, but so many new buildings were going up in Salt Lake City that skilled laborers and quality brick and stone were in short supply. The building was not completed until late in 1902.