In gene-targeting, CRISPR makes a really good pair of "scissors".

Equities Engineering for the New York office of Goldman Sachs.

How can we make STEM education more inclusive and effective?

Utah has joined the prestigious Association of American Universities.

Discover Magazine is the Research Report for the College of Science at the University of Utah.

If you would like to recieve a copy of Notebook or Discover Magazine please email office@science.utah.edu.

Interested in Science and Mathematics? Want to learn how to do research and become a scientist? Seeking to connect with exciting career opportunities as a freshman or transfer student?  This is what the Science Research Initiative (SRI) is all about.

Step into the unknown to tackle big, open-ended questions. Learn by doing.  Experience the excitement of Science and Mathematics.  Click on the link below to request more information.

College of Science's Ambassador and sophomore biology student in the Shapiro Lab.

The College of Science offers a number of scholarship opportunities for incoming freshmen, undergraduate and graduate students. The application deadline is March 1, 2020.

CoS Scholarships for New Students

CoS Scholarships for Current Students

Scholarships for freshmen, undergraduate and graduate students. Apply in November. 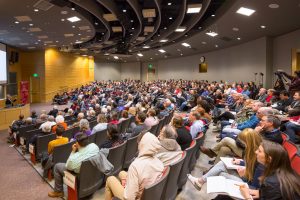 Science has a long and sweeping legacy at the University of Utah, helping to drive many of the U’s most significant advances. The University’s first Ph.D. was awarded to Jim Sugihara in Chemistry, who studied under the legendary Henry Eyring. Eyring, the inaugural Dean of the Graduate School, turned his administrative offices in the Park Building into a laboratory where he educated generations of scientists. Among them was Peter Gibbs, who went on to chair the Physics & Astronomy Department and established the longest-running lecture series on campus; Frontiers of Science. The series featured 30 Nobel laureates, including Mario Cappechi, who originally joined the U as a faculty member in the Department of Biology. Elsewhere in the College, graduates from Physics and Mathematics, like Alan Ashton (co-founder of WordPerfect), Ed Catmull (co-founder of Pixar), and John Warnock (co-founder of Adobe), went on to pioneering developments in the nascent field of computer science.

This spirit of excellence is alive and well today. The College’s research prominence helped propel the U to ever greater heights, including the University’s recently announced membership in the prestigious Association American of Universities. AAU invitations are infrequent: this year’s invitations are the first since 2012. Membership elevates the University to an exceptional category of 64 peer institutions of the highest research caliber. This recognition is supported by a rising tide of faculty and student achievement in the College of Science, from faculty membership in the National Academies to the most competitive students awards (including a string of four consecutive Churchill Scholars). 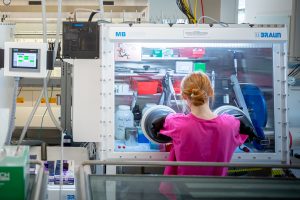 Our passion for knowledge extends from the lab into the classroom. Never content to accept the status quo, we are working to innovatively intertwine our research and education missions. The Science Research Initiative (SRI) will, over time, give every incoming College of Science student the opportunity to participate in discovery-based research in state-of-the-art space on the third floor of the Crocker Science Center. The program will help develop high-demand skills in our students, preparing them for exciting careers in the fastest-growing segments of today’s STEM economy.

As we continue to build on the College’s legacy, it is an exciting time for the remarkable students we serve, the dedicated faculty in our ranks, and the accomplished alumni that enhance our reputation nationwide. Extraordinary things are happening at the College of Science. Thank you for being part of our journey.